What is Free energy?

What does "Free Energy" Mean? It is a common arguement that "free" energy is impossible, because most think its definition impllies that... 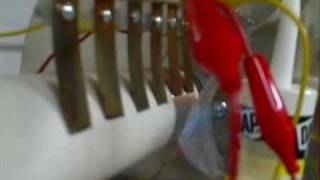 Hi Rick
Just wanted to let you know that I have successfully built your New Fuelless Engine Model 2, and it has worked as advertised!  You guys are doing a great job. Thank God for you!

As a generator the output is 240 VAC x 14KW.  I am now going to build a second model and this time I am going to try using ABS Plastic.  It should work even better than the UHMW polyethylene white
plastic. I am also going to make a few modifications to raise the efficiency. The motor runs cool to the touch! AMAZING!   I have also ran my entire home with this motor / generator – and my home is all electric!

Rick
My son and I have built the Fuelless Engine Model 2, and have stopped the house meter!
And we have went a step further and we added a second motor to the shaft. Have not gotten it
over 950 RPM, but we have a 220 volts output!  Made some of it from black plastic. Works very well.

Waiting for more information on your Phase II motor / generator!

Successfully Built Our Fuelless Engine Model 2!
Running home as a hybrid system, and saving big money on their electric bills!

I first tested your motor / generator, running it on a 12 VDC battery for one month to see if it would
keep the battery charged and not lose any energy. The test was successful! The battery stayed fully charged!

I now have it hooked up to my home and it is saving me on my electric bill! My wife does not like me experimenting with my
Fuelless Engine ( disconnecting it to the grid ), because our electric bill goes up when I have it offline.

MY PHASE ONE TEST OF THE FUELLESS ENGINE WAS A SUCCESS! – SAVING US MONEY! –

Hello Rick
I just wanted to let you know that we have successfully stopped the house meter!
As you can see we made it all out of plywood. We are very happy with your invention!

Lenny B. Florida – USA  4-21-2016
NOTE FROM CREATIVE SCIENCE:  We do not recommend that you use a wood construction.
May warp and not last as long or get the same results as the HDPE or UHMW plastic material.

Greetings Rick
Finally lit up the gadget. ( SP500 AC Generator Kit ). Well my finishing is not spot on – but hey…i did it all alone. Took a while to build –  but well…it lit up ( works ). So, i am running it with a gear motor powered by a 12 volt DC battery.  Me and my uncle would be interested in buying Qty- 100 SP500 AC generator Kits from you. Could you deliver them in about 3 to 4 months time?

I am writing in regards to Creative Science & Research. I would like to inform you that I am U.K based and one of the many happy people who have built an over unity working system, which has been powering my appliances. I am NOT an engineer, but I am good at making things, and most of what I have learned has been through this project with Creative Science!

I have a free energy system in place, and it is working for me!
Larry Fld from – UK  United Kingdom

Hello Rick
I have successfully built your Model 2, and have stopped the house meter dead in it’s tracks! Very happy customer!
It works just as you have said. I will contact you and tell you a few things I did that might help other customers.
Thanks

I purchased your plans on 09/30/2013. I have built an operating motor, and it works fine. I made a minor change, wiring the coils. Wired them series-parallel, separated the north south pole coils using jumpers.

I just wanted to inform you, I am amazed by your Fuelless Heater,  Wow! It really works!  I have been a mechanic for about 10 years and when I saw how much heat came from my small spaghetti can heater I was absolutely AMAZED!! I am building a Hybrid car and will build a bigger unit to heat it with.  I am also going to build your Fuelless Engine.

Just wanted to let you know that I have successfully built your New Fuelless Engine Model 2, and have run my entire home with it! I have an all electric home. It has worked as advertised! You guys are doing a great job. Thank God for you! The Output is 240 VAC x 14KW. I am now going to build a second model and this time I am going to try using ABS Plastic.  It should work even better than the UHMW polyethylene white plastic. I am also going to make a few modifications to raise the efficiency. Your free energy motor/generator runs cool to the touch! AMAZING!
John W.  Pentwater, MI.  49449  USA